The spy machine and the impossible painting

The idea of this project sprang from a course given by Prof. Eric Goles at the University of Chile, under the title “Man, Machine and Mathematics”. On the basis of this idea I developed a plan which consisted of turning or translating some mathematical paradoxes into the language of Visual Arts. This work is therefore based on problems worked on by Alan Turing and Kurt Gödel. They found that certain mathematical problems were unsolvable (“The Spying Machine” by Turing, and Gödel’s “Self-Reflection Theorem”). The proposition was to translate a mathematical problem, not as a metaphor, but as something that intrinsically belongs to the domain of painting.

I decided to paint like a Turing’s machine, taking in this case the Turing machine as a finite set of instructions. In this procedure I took the actions which a painter applies when he wants to copy or represent any model and reduced them into axioms. That is to say, to observe the shape and colour of the selected model, and to paint it on the canvas without discerning and comparing if the copy is equivalent to the model. This “machine” also lacks memory, so it can only paint in the 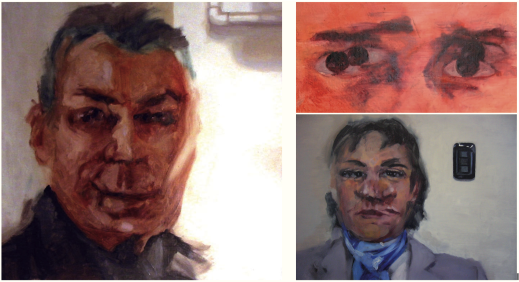 present time, which means that any change or movement is interpreted as an error and therefore has to be corrected.

Theoretically, if nothing changes on the model, the machine would perform a complete pictorial representation of the chosen image and stop. I started to paint using this system with different kinds of models in series. For the first series I used digital watches. Following the aforementioned axioms, I painted the watch and its digits, and as time elapsed, these digits  constantly changed their shape, and, therefore I had to correct for every incompatibility between what had already taken shape on the canvas and what I would see “now”.

Keeping in mind that the machine has no memory and no external reflection to its task, when should it stop? According to which criteria? -well, it can not stop.

This impossibility is visible through the materiality of the painting. The thickness of the oil and  the brush strokes of the different corrections  leave a trace of expression of that which could  not be represented, allowing differences  of velocities between hours, minutes and  seconds to be seen, and giving an impression of time in  a fixed image. In this case, time has been made visible, but only to a certain extent   because of the impossibility of capturing the  present time.

With this “machine” I also made a series of  portraits where the people posing were allowed to move while I painted them. Ignoring the  completeness of a face, or the obvious mechanisms of causality, I translated the colours  and shapes of the persons in a 3-D space to an  image in a bidimensional canvas, as pixels of  information.

The result is a fragmented painting with an accumulation of errors and correc- tions, appearing to be moved or distorted by  organic pixels.

With these operations inspired in the machines of A. Turing it is inevitable to close  this series with a selfportrait. I designed  the following experiment using a mirror as  model, which is pointing perpendicular to  the canvas creating a selfreflecting situation. Under the known rules I allowed the  program to run and then explore the results.  Every shape that I saw and painted on the  canvas, was reflected back onto the mirror,  producing a infinite sequence of reflections  captured on the canvas.

This creates a selfreferential painting, which is not possible to  be painted in a finite time.

In addition to this infinite recursion emerged  another aspect that made this task even more non- tractable: as I tried to paint the  reflection of the hand and the brush which  was performing the task of painting itself, this  attempt turned into a never ending persecution,  in which the brush would always move but  never caught up with itself. The same experiment was  done using a video camera and a monitor  as a closed system producing a very similar  situation.